Proof That CO2 Does Not Cause Warming

USGCRP (GlobalChange.gov) uses this graph to prove that CO2 drives the warming. However, this study explains why the graph actually proves the opposite, which is that there is no correlation over the whole 1880-2000 period: 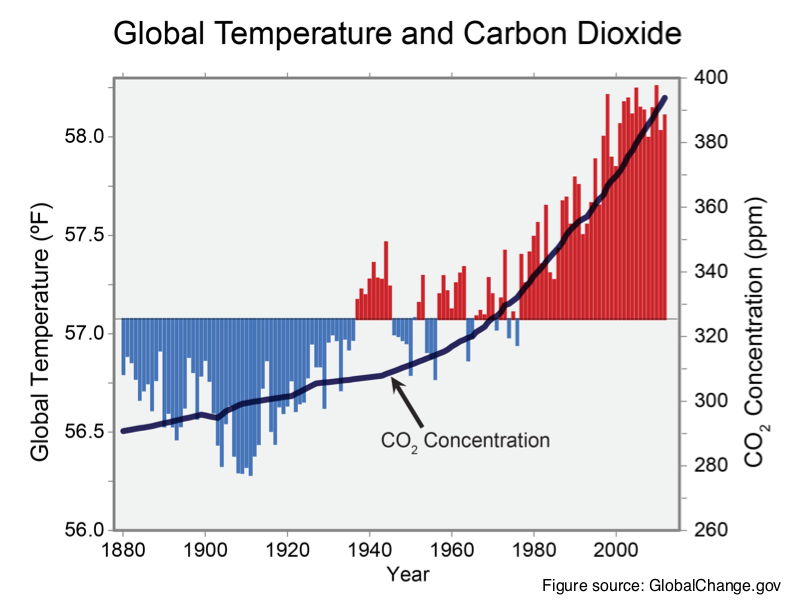 Global annual average temperature (as measured over both land and oceans) has increased by more than 1.5°F (0.8°C) since 1880 (through 2012). Red bars show temperatures above the long-term average, and blue bars indicate temperatures below the long-term average. The black line shows atmospheric carbon dioxide (CO2) concentration in parts per million (ppm). While there is a clear long-term global warming trend, some years do not show a temperature increase relative to the previous year, and some years show greater changes than others. These year-to-year fluctuations in temperature are due to natural processes, such as the effects of El Niños, La Niñas, and volcanic eruptions.[Emphasis added]

Indeed, at first view, the CO2 concentration seems to be driving the global temperature increase. And the temperatures in red since the 70s, to the right side of the graph, are a strong indication for that.

The graph authors also explain that the yearly fluctuations in temperature on the blue side of the graph are due to short term natural processes, thus concluding that they can be excluded as unimportant.
So, the graph seems to be a solid proof to support the AGW theory.
Yet, as always, the devil is in the details.

A closer look at the detailed graph in Figure 2 shows that the above conclusion is not true, since the 130-year statistics are actually divided into five clearly separated – and quasi-independent – periods, from which the first four are clearly 30-year long, enough to be classified as belonging to “climate,” and could not be considered as just “weather.” 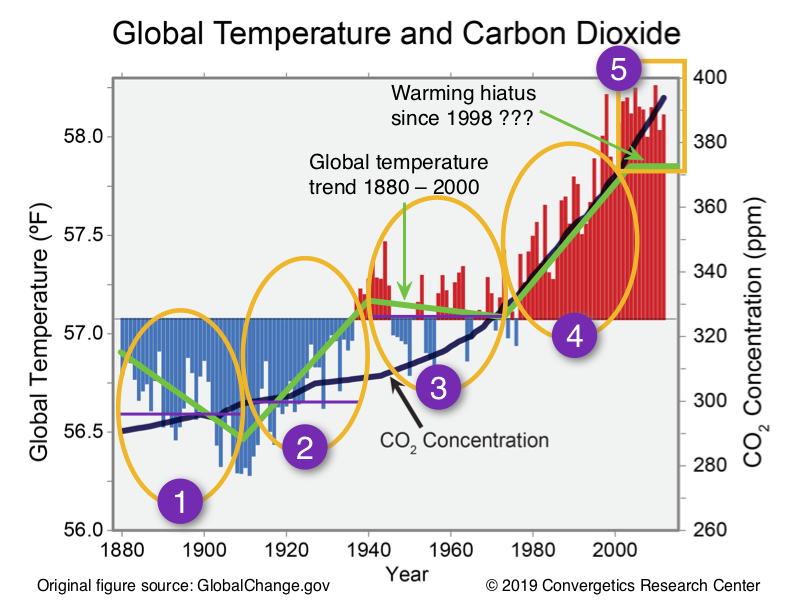 In fact, these temperature variations are too important to be explained as mere “effects of year-to-year natural processes, such as El Niños, La Niñas, and volcanic eruptions, as the climatologists assumed.

First, the IPCC has already admitted that global warming has paused between 1998 and 2012, but later, some climatologists started to claim that this warming hiatus never happened. As a result, they “doctored” the statistics to show increased warming despite the reality. So, to avoid using this controversial data, we exclude from this assessment the fifth period, i.e. the temperature statistics above 2000.

Over the whole period covered in the graph, the CO2 concentration is rising, yet with a higher rate just since 1970.

For this reason, we start the analysis with the fourth period (1970-2000), where there is a perfect correlation between the two variables.

Yet, it is possibly that this relationship was achieved by the article authors by simply adjusting the measuring scales of the two variables to give this impression. (Note that this is a common mathematical trick, which is perfectly acceptable. Also note that the purple horizontal lines in ovals are used to assess the trending angles of the two variables in each period.)

And, as always, the proof is in the pudding. Once the two scales have been set to correlate during the fourth period, the confirmation that the CO2 concentration is indeed driving the climate change is obtained if, and only if, the same correlation coefficient applies to all of the other three periods.

During the first period (1880–1910), the CO2 concentration is rising and temperature is receding, which means a negative correlation. During this period, the temperature variation was not driven by CO2.

When the second period (1910–1940) is compared with the fourth period, the temperature is rising with a rate several times higher than the CO2. The temperature does correlate with CO2, but the value of its correlation coefficient is less than 0.3, meaning that the relationship between the two variables is weak and likely insignificant.

Even more, a verification of the temperature graph found on the CRU website in June 2019 shows that the second period has the same warming rise as the fourth period: 0.47ºC (0.84ºF) with equal length, exactly as in Figure 2 above. Again, this could not happen if there was a correlation between our two variables.

Finally, while during the third period (1940-1970) the CO2 concentration and concentration rate are higher than during the first two periods, the temperature decrease is smaller, almost flat. As a result, there is an insignificant negative correlation between these two variables.

But this steady period plays an important role in our story, and we get a glimpse on it in the next chapter.

To conclude, the correlation coefficient established to achieve a perfect match between the CO2 concentration and temperature rise during the fourth period is not validated when we are looking at the four periods at the same time.

Therefore, this graph used by the AGW believers to prove that the CO2 and global warming correlate, is in fact a solid proof for the opposite: