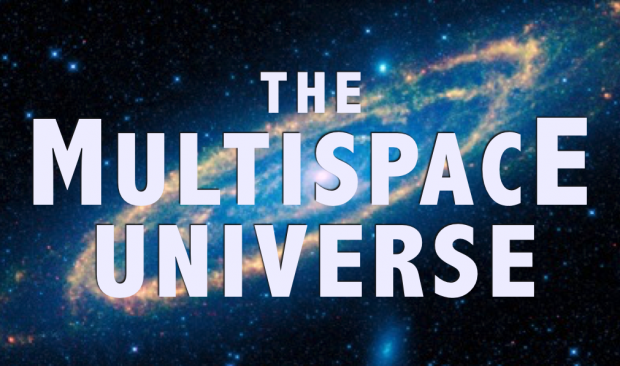 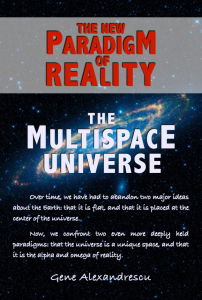 Convergetics Research Center founder and president Gene Alexandrescu will be releasing a book advancing a multispace model of the universe.

The Multispace Universe, the New Paradigm of Reality will be launched in 2020.

Since the dawn of humanity, the universe is considered to be the alpha and omega of reality, a unique and smooth space. However, while working within this paradigm science has accumulated many questions to which no one has yet found, and may never find, the answers.

The Multispace Universe, the New Paradigm of Reality book advances the hypothesis that this universe is a multispace world, opening the door to new insights that could have never been apprehended in the present single space paradigm. This hypothesis is based on the author’s discovery of an extradimensional space-time transformation embedded within the theory of Special Relativity. Although space-time is perceived to be continuous, in the new model the universe consists of countless independent and overlapping spaces. Moreover, these spaces rotate “relativistically” with respect to each other through dimensions that are not perceived by the human senses. Spaces that are orthogonal to our universe appear to be dimensionless and eternal, a prediction that explains quantum spaces and the physical nature and properties of elementary particles. Our universe is just one of many coexisting universes embedded within an unseen yet very physical reality.

The book is divided into three parts:

1.    The Single-Space Paradigm: Facts and Open Questions in Present Science
In the first part of the book the reader is introduced to some of the most important open questions of modern science, seen from the perspective of the single-space paradigm. What are the true natures of space, time, elementary particles, and gravity? Will the photon’s dual nature or the physical nature of quantum spaces ever be explained? Is it possible to unify gravity with the other three fundamental forces?

Although modern science has made astounding strides, discovering many well-kept secrets of the world, the fundamental questions mentioned above are just a few of those resolved by the new multispace paradigm. This discussion prepares the reader for explanations given in the book’s third part, which describes the multispace model in detail.

2.    The Multispace Diagram: Its Discovery, Facts and Hypotheses
The two-dimensional space-time diagram of Special Relativity was introduced by Minkowski in 1908. Over the last century, this intuitive visual aid has helped clarify Einstein’s theory, facilitating its dissemination to scientists and the general public. Minkowski was also the first to suggest that the world is composed of an infinite number of spaces, but his writing was not explicit enough for other scientists to take his hint seriously.

One century later, the Multispace Diagram (MSD) discovered by Alexandrescu provides a new tool for interpreting the reference frames of Special Relativity. Moreover, Alexandrescu’s theory implies that the universe has three “relativistic” dimensions in addition to the three spatial dimensions and time of our experience. This part of the book demonstrates that reference frames are not merely mathematical coordinate systems, but independent physical spaces in their own right.

Whereas in Einstein’s relativity the observer and the observed reside in the same space-time, in the new Multispace Relativity they inhabit independent but overlapping spaces. Each observer actually sees a projection of the observed space onto his own. The relative speed of two reference frames is directly related to the relative angle between them. This difference reproduces the behavior of Einstein’s relativity for subluminal speeds. However, in the Multispace Model an observed space can be orthogonal to the observer’s space not just at the speed of light, but in other situations existing in nature. Therefore, it is possible for an observed space to appear dimensionless to the observer regardless of its real size or their relative speed.

The hypothesis of the multispace paradigm is supported by the work of several modern physicists who have started to consider the physical aspects of reference frames and the idea of multiple spaces.

3.    The Multispace Paradigm: Predictions about the True Structure of Reality
The book’s last part introduces the two pillars of the multispace model: (1) Reality is composed of countless independent spaces, and (2) Many of these spaces are relativistically orthogonal to the space-time of our universe and/or to each other. 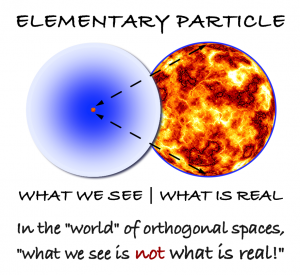 From this foundation, the author first shows that orthogonal spaces, while physically embedded in the universe, are at the same time external to the space of the universe. This concept may be puzzling at first glance, but in fact elementary particles are a ubiquitous and ideal example of orthogonal spaces. Their curious nature has been acknowledged for decades by both quantum mechanics and string theory. Developed within the single-space paradigm, these theories lack the tools to adequately explain the physical aspects and properties of these apparently dimensionless pieces of matter, which at the same time can create a field of infinite spatial extent.

The MSD discovery demonstrates that what an observer sees in his reference frame may be different from what is real in the observed space. A direct consequence of the multispace model is that orthogonal spaces can appear from an observer’s viewpoint as dimensionless particles with spatially infinite fields. In effect, observers are looking at an independent space “from the outside”. However, the particle is actually a finite physical space (a core) surrounded by a thin boundary. One cannot see the particle’s core “from the outside,” but the field of the particle is actually the projection of its boundary onto the space of our universe.

The book continues by describing several other surprising predictions of the multispace model that relate to unsolved questions of physics. In the new paradigm, reality reaches far beyond the immediate extent of our universe. There is no fundamental difference between our universe, other independent universes, and dimensionless elementary particles: they are perfectly equivalent space-time frameworks obeying the same physical laws.

With elementary particles at one end of the cosmic scale and other universes at the other, it is impossible to see the orthogonal spaces from our own universe. With this in mind, absolutely anything could exist in the physical, orthogonal spaces of the multispace model.

The complex nature of reality can be better known once the idea of a unique space-time is brushed aside. The broad implications of the multispace paradigm can be understood by all science aficionados.

The Multispace Universe, the New Paradigm of Reality book will be available for pre-ordering on the Convergetics website. For more information, please go to https://convergetics.org